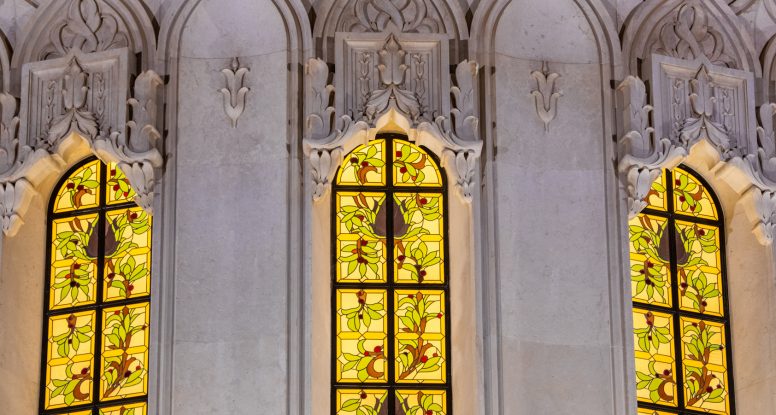 The following is a partial transcript from an 11-part lecture series given by Professor Nader Saiedi called “Text and Context in the Baha’i Heroic Age”. From Talk 1, it begins at 3:31. See bottom of post for audio of the full lecture series.

Now, the Bahá’í Faith begins with a particular event, as you all know, that was May 23, 1844. A young scholar of the Shaykhí school called Mullá Husayn… meets the Báb in Shiraz and he’s invited to the house of the Báb, and they have conversation and interactions. And through this interaction, of course, the first major work of the Báb after the Declaration is beginning to be revealed, and that’s the Commentary on the Súrih of Joseph, which I’m sure I’ll talk about in one of these sessions.

But I want you to pay attention to this historic event. This is the moment of the inception of the Bahá’í Faith. But something is happening here which is very, very important – and very crucial – and that is the fact that the beginning of the Bahá’í Faith, which according to the Báb, that night was the beginning of the Day of Resurrection, the Day of Judgement. It’s a historic night. That day, which becomes the beginning of the … Bábi/Bahá’í calendar, is not the day in which a new relation emerges between the Báb and God … It has nothing to do with the relation of the Báb and God. What defines that particular night, is that that night defines a particular relation between God – through the Báb – and a particular human being. Namely Mullá Husayn.

In previous Dispensations, the conception of the beginning of religion is understood as the moment in which prophetic consciousness emerges for the first time. For example, Prophet Muhammad receives revelation from the Angel Gabriel – that is the moment that Islam begins: the moment He becomes conscious, and receives for the first time, verses from God… In the case of the Bábi/Bahá’í Faith, it is very interesting , that this is not the case. The Báb Himself, in various Writings of the Báb, very explicitly says that before that night [May 23, 1844], the prophetic consciousness had taken place: He talks about the first day that Divine Revelation took place, then He started to write in the form of Divine Revelation, and He gives the date of that. And that date of course is not the 23rd of May of 1844. That particular one is about 50 days before that. Also He discusses in His Writings about other situations in which He became conscious of His Mission.

The beginning of this new cycle is, on the contrary, the day on which a particular human being becomes ready, and therefore a dialog, conversation, between the Báb and this human being representing humanity takes place.

The beginning of this new cycle is, on the contrary, the day on which a particular human being becomes ready, and therefore a dialog, conversation, between the Báb and this human being representing humanity takes place.

This is very, very important. It gives us a sense of the meaning of religion, and the identity of religion. In the past, religion was understood by the followers of those religions, as an expression of the absolute Will of God. It was the relation between God and the Prophet. It had nothing to do with history. It had nothing to do with context. It had nothing to do with humanity. It was a relation between God and the Prophet, namely, it was nothing but expression of arbitrary Divine Will. There is a Divine Will based upon Divine Knowledge, and, at this moment, religion starts. Because religion was understood in terms of Divine Will, for that reason it was easy for the members and followers of these religions to assume that their religion is the last religion, the last revelation. A revelation that would never change because the identity of that revelation has nothing to with society, with humanity, with the stage of development of humanity, or things like that. It was just a matter of the Divine Will. It becomes something absolute and unchangeable.

Now, with the events that take place on that particular night [May 23, 1844], what happens is that the beginning of religion is defined as the moment that a particular interaction between God (through the Báb) and humanity takes place. Religion now becomes a product of the interaction between humanity’s/society’s stage of the development of civilization… AND the Divine Will. No longer is religion just an expression of the Divine Will. Religion is the product of this dialog between the Divine Will and the stage of development/receptivity of humanity.

From this moment, of course, religion, Divine Will, Divine Truth, Divine Laws and so on, all become historically specific. And therefore the concept of history enters the notion of religion and revelation.

[The idea that] religion [is] something outside of history [means]: society can change, history can change, but religion remains the same thing, forever and ever, because it’s the Will of God… history is changing, people are changing, but of course Divine Knowledge, Divine Essence and so on, doesn’t change. That was the previous conception.

But now, religion from that very moment in which this religion is begun, which for the Báb is so important that in the Persian Bayan He gives the exact minute of that – you are all familiar with that – He says two hours and eleven minutes after the sunset. He even gives the minute. And He says the Day of Resurrection starts at that moment. Now this is the moment, of course, that humanity also has achieved a particular stage of development. And so, the Will of God takes different shapes and forms in accordance with this interaction with humanity, history, society, civilization, and so on.

From this moment, of course, we have the birth of the doctrine we call progressive revelation. The doctrine of progressive revelation means that religion has nothing to do with the unchangeable essence of God, or knowledge of God. Religion is the reflection of Divine Essence, a reflection of Divine Knowledge, in history, in the world. And of course, the world and history, they continue. They are dynamic, they change, they transform, and so on. And because of this interaction, religion – its spiritual doctrines, its social laws and so on – becomes something dynamic and has to change. And so religion can be a cause of progress and advancement of humanity, or it can become one of the main forces, obstacles, against the development of humanity. Both are possible. The crucial issue is this interaction.

So we have ‘text’ and ‘context’. ‘Text’ refers to that Divine Revelation, you know, the books and messages, and so on. And ‘context’ refers to the historical stage, historical conditions, events in society – whether it is in Iran, in the world – and the degree of development of humanity. For the Bahá’í Faith, the thesis of progressive revelation means this: that ‘text’ takes particular forms and shapes, not on the basis of an arbitrary Will of God, but the form and content of the ‘text’ is determined to a large extent by the requirements of the time – by the needs of humanity, by the stage of spiritual development, cultural development of humanity at the particular point of time. Religion is no longer something ahistorical, outside of history… religion is the product of the interaction of the Sacred and the world. It’s very important. So the very fact that we celebrate the night of the Declaration of the Báb, you see how important it is and what a philosophical, sociological revolution and new meaning is implicit in this whole idea.

Brought to you by BahaiBlog.net and courtesy of the Local Spiritual Assembly of the Baha’is of Santa Monica, California, you can listen to the entire series of talks here:

Professor Nader Saiedi is well known for his books Logos and Civilization and Gate of the Heart. Born in Tehran, Iran. He holds a master’s degree in economics from Pahlavi University in Shiraz and a Ph.D. in sociology from the University of Wisconsin. For over 25 years he was a professor of sociology at Carleton College in Northfield, Minnesota. In 2013, he became the Taslimi Foundation Professor of Baha’i Studies in the department of Near Eastern Languages and Cultures at UCLA.