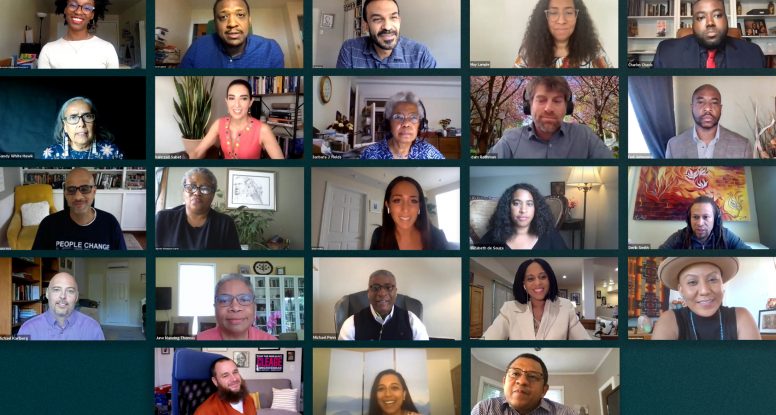 The following excerpted article is from bahaiworld.bahai.org. Content ©2022 Bahá’í International Community.
Photo: Panelists of a three-day online symposium held by the U.S. Bahá’í Office of Public Affairs titled Advancing Together: Forging a Path Toward a Just, Inclusive and Unified Society. Credit: https://news.bahai.org/story/1514/

The quarter century between 1996 and 2021 was a period of mounting racial contention in the United States. Marked by increased police killings of unarmed African Americans, race riots, burning of Black churches in the Deep South, the rise and spread of white supremacy movements, and wide-spread racial polarization, it resembled some of the worst racial strife of the 1960s. Not even the historic election of the first Black president, which many hoped would usher in a post-racial society, could turn the tide.1

During that period, the American Bahá’í community’s longstanding dedication to racial harmony and justice continued to be expressed in numerous initiatives undertaken by individuals and organizations. These initiatives unfolded amidst a period of profound advancement across the Bahá’í world. In 1996, the worldwide Bahá’í community entered a new stage in its development, propelled by a series of global Plans that successively guided “individuals, institutions and communities” to build the capacity to “[translate] Bahá’u’lláh’s teachings into action.”2 In turn, this progress made the possibilities for social transformation more and more visible to those laboring in the field of service and had implications for the efforts of Bahá’ís to combat racial prejudice and injustice.

In July 2020, for the first time in more than 30 years, the House of Justice addressed the American Bahá’í community, as it had done during other periods of racial turmoil in the United States:

A moment of historic portent has arrived for your nation as the conscience of its citizenry has stirred, creating possibilities for marked social change. … you are seizing opportunities—whether those thrust upon you by current circumstances or those derived from your systematic labors in the wider society—to play your part, however humble, in the effort to remedy the ills of your nation. We ardently pray that the American people will grasp the possibilities of this moment to create a consequential reform of the social order that will free it from the pernicious effects of racial prejudice and will hasten the attainment of a just, diverse, and united society that can increasingly manifest the oneness of the human family.”3

In the letter, the House of Justice pointed out the difficult path ahead amidst inevitable setbacks, saying: “Sadly, however, your nation’s history reveals that any significant progress toward racial equality has invariably been met by countervailing processes, overt or covert, that served to undermine the advances achieved and to reconstitute the forces of oppression by other means.” The “concepts and approaches for social transformation developed in the current series of Plans,” explained the House of Justice, could be “utilized to promote race unity in the context of community building, social action, and involvement in the discourses of society.”4

The sections below review developments in the US Bahá’í community during the period between 1996 and 2021, exploring their implications for the community’s response to racial injustice and the pursuit of racial unity.

For the Bahá’í world, the Four Year Plan (1996 – 2000), the first in the series of global Plans spanning the quarter century, marked a “turning point of epochal magnitude.”5 The Plan assisted the Bahá’í community to mature in its understanding of transformation—both internally and in the world at large.

First clumsily and then with increasing ability, more and more Bahá’ís from diverse national communities learned to take action within a common framework. While it took more than a decade for new patterns of thought and action to take root across the US, the systematic approach called for by the House of Justice came to be appreciated as a vital facet of the American community’s efforts to combat deeply entrenched social ills, especially racism.

In parallel to the processes unfolding in the Bahá’í world, the 1990s and early 2000s saw Bahá’ís in the US continue to participate in a range of race-related activities in the wider society, often taking part in, and sometimes leading, initiatives in support of racial harmony. For example, many local Bahá’í communities participated in annual celebrations in honor of Dr. Martin Luther King, Jr., a leader of the nonviolent civil rights movement of the 1950s and 1960s. In June 1965, the National Spiritual Assembly of the Bahá’ís of the United States sent a telegram to Dr. King’s organization, the Southern Christian Leadership Conference, supporting the historic march on Montgomery: “YOUR MORAL LEADERSHIP HUMAN RIGHTS IN SOUTH PRAISEWORTHY HISTORY MAKING FREEDOM IN UNITED STATES. SENDING REPRESENTATION MONTGOMERY AFFIRM YOUR CRY FOR UNITY OF AMERICANS AND ALL MANKIND.”6 This relationship between the annual Martin Luther King Day celebrations and the Bahá’í race unity work has continued through the years. In 2002, the Bahá’í community of Houston was asked to lead and close their local parade, which attracted some 300,000 people to the parade route and was partially broadcast on four national television networks.7 Similarly, a number of Bahá’í communities participated in interfaith services responding to the burning of Black and multiracial churches.8

At the same time, Bahá’ís were initiating their own efforts to promote racial harmony and justice in light of Bahá’u’lláh’s teachings. The Local Spiritual Assembly of Detroit, Michigan appointed a task force with a mandate to promote racial unity, which for seven years (ending in 2000) promoted and conducted an annual Models of Racial Unity Conference involving Bahá’í and non-Bahá’í speakers from a range of diverse professional, racial, ethnic and religious community groups and associations.9

In 1998, the US National Spiritual Assembly launched a national campaign to raise awareness of issues related to race unity in the country. The campaign included a television program called The Power of Race Unity, which aired on several national broadcast stations, as well as many local and regional channels, and a document penned by the National Assembly entitled Race Unity: The Most Challenging Issues, which was mailed to several thousand homes. It was estimated that 80 percent of local Bahá’í communities in the country hosted activities in support of the campaign, ranging from private viewings of the video to workshops and public discussions about racial unity.10

The opening of the Louis G. Gregory Bahá’í Museum in Charleston, South Carolina, on 8 February 2003,11 was among the most special developments of the period. The museum honored a dedicated champion who personified the American Bahá’í community’s long and unyielding commitment to racial unity and justice. According to one source, this was the “first Bahá’í museum in the world.” It honored “both a descendant of a black slave and a white plantation owner” in a city “through whose port an untold number of Africans passed into slavery and whose citizens witnessed the shots that came to symbolize the beginning of the Civil War.”12 It was hailed by one speaker at the dedication as a “beacon of unity” for the world.13

Additionally, this decade saw ongoing efforts to tend to the hearts of, and build capacity among, African Americans within the Bahá’í community, especially African-American men, long subject to injustice in the form of harmful stereotypes, police brutality, staggering community violence, and mass incarceration. Many of these Bahá’ís did not find within the dynamics of their Bahá’í communities the patterns of worship, praise, and mutual support for which they longed. In many cases, their participation faded until they were invited back by the warmth of a series of gatherings known as the Black Men’s Gathering.14

Between 1987 and 2011, the Black Men’s Gathering was dedicated to “soothing hearts” of black Bahá’í men who “had sustained slow-healing wounds” and “cultivating capacity for participation in a world-embracing mission.”15 From the growing numbers of African-American men involved in the process arose melodies of praise and worship resonant with the African-American tradition, and gatherings led to travels to share the message of the Faith throughout many countries in Africa and the Caribbean. In July 1996, for example, more than one hundred Black Bahá’í men from the US, the Caribbean, Canada, and Africa attended the Tenth Annual Black Men’s Gathering in Hemingway, South Carolina, at the Louis Gregory Institute. In response to the call of the Universal House of Justice to “be a unique source of encouragement and inspiration to their African brothers and sisters who are now poised on the threshold of great advances for the Faith of Bahá’u’lláh,”16 forty-five of the participants “pledged to visit Africa over the following three years to share Bahá’u’lláh’s message with the people there.17

In 2004, the editors of a national Bahá’í publication, World Order magazine, published a special issue with the following introduction: “We found that the fiftieth anniversary of Brown v. Board of Education, the landmark 1954 decision of the United State Supreme Court that started the judicial desegregation of U.S. schools, afforded an opportunity to look at the matter from a number of perspectives.” The issue included articles examining the historic decision from the contexts of law, the teaching of history, and psychology, among others, written by Bahá’ís from diverse professional fields, racial and cultural backgrounds, and experience in promoting racial unity.”18

These highly meritorious efforts carried forward the American Bahá’í community’s legacy of dedicated service to the cause of race unity, yet the community had a considerable distance to go in making the shift called for by the House of Justice to an approach focused on systematic processes that would build capacity in individuals and groups, and eventually in whole populations, to contribute to the kind of transformation that could ultimately dismantle the disease of racism.

In the country’s history, every time racism appeared to have been dealt a major blow—with the end of slavery, or the end of legal segregation, for example—it managed to rear up in a new form. It has proven itself deeply entrenched in American society. For this reason, not withstanding the many activities that Bahá’ís had undertaken to address racial concerns, and their obvious merits and achievements, the ultimate results of such efforts had often been limited in their effect. As the Universal House of Justice noted, such efforts have often been characterized by “a cyclical pattern, with fits and starts,” presented with fanfare while failing to elicit universal participation.19 Activities, often accompanied by great enthusiasm and energy, would reach a peak and then, after a period of time, lose momentum and atrophy. For this reason, developing the capacity for collective, systematic action needed to receive a greater share of the attention of the American community. The groundwork for such an advance was more firmly laid in the next decade.

Read article in its entirety at bahaiworld.bahai.org

Emily Lample served on the Learning Desk of the National Spiritual Assembly of the Bahá’ís of the United States from 2013 to 2020. Richard Thomas is Professor Emeritus of History at Michigan State University. He is author and coauthor of several books on race relations, the African American experience, and the Baha’i Faith.