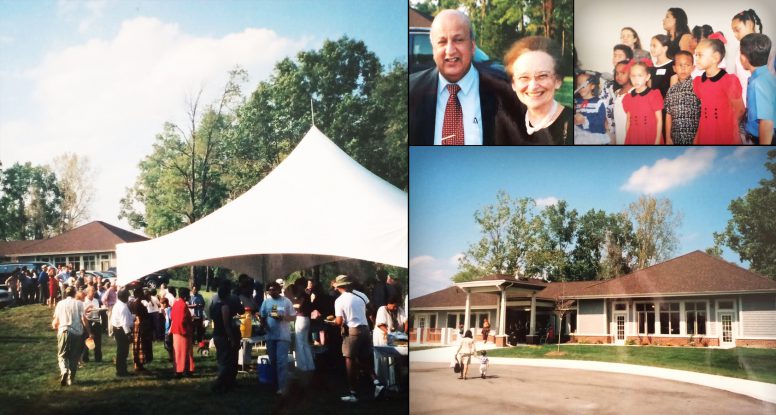 As our Baha’i Center of Washtenaw County opens its doors for this dedication, we look back on a long history of development culminating in this momentous occasion. Unity and strength of purpose have made the dream of a Center a reality, and as we look back in time at the journey toward its realization, we see clarity and purpose of design in the unfolding pattern of development. It has been a long journey, with a variety of obstacles to overcome and successes to celebrate. It is full of prayer and dedication, growth, lessons learned and ideas fulfilled.

The Baha’i Center of Washtenaw County project dates back to the mid 1960s, when Dr. Habib Moyyad, private physician to ‘Abdu’l-Baha, gave a monetary donation to encourage the building of a Baha’i Center in Washtenaw County. Shortly thereafter, the state of the Baha’i funds was such that these monies were turned over to the National Spiritual Assembly of the United States, in order to help in financing and building the Louhelen Baha’i school, which was a more pressing and urgent need.

But people did not forget the dream.

In 1994, the Ann Arbor Spiritual Assembly appointed a Baha’i Center Search Committee to investigate land and/or buildings suitable for a Baha’i Center. Although the committee concluded that the need for a Center was pressing, they were unable to find either a suitable building or affordable land despite a search lasting over a year.

Ten acres of land in Ypsilanti Township was offered in November 1995 at a fund raising dinner at Peace Neighborhood Center in Ann Arbor. The possibility of a site that is easily accessible, yet wooded, quiet, and promoting a feeling of peace and spirituality was seen as a hopeful sign, and atmosphere at this meeting has been described as one of unity and joy. The land was accepted by the four Assemblies participating in the consultation (Ann Arbor, Pittsfield Township, Ypsilanti City, and Ypsilanti Township), and was formally donated to the Spiritual Assembly of Ypsilanti Township, within whose jurisdiction the land lies, in December 1995.

The committee began to organize regular fund raising, and the idea of providing dinners to the community where fellowship could be enjoyed as well as donations made toward the building of the Center was encouraged. Dinners were organized to have an international flavor, with themes of diversity and unity as present in the Baha’i community. Participation came from all over the county, as well as the state of Michigan, and beyond. To date, over one hundred fund-raising events have been held over a period of ten years.

Kubala/Washatko, a well-know Baha’i architectural firm in Wisconsin, was retained and a plan for a two-story, 14,000 square foot building was presented, which reflected a great deal of community input. Plans were then presented to the Ypsilanti Township Planning Commission but were initially rejected due largely to concerns of neighbors who did not want a special zoning variance issued. Considerable coverage in the local news media resulted in unexpected proclamation opportunities. Amidst the controversy, some neighbors responded positively to the idea of the Center, including one who wrote the following:

“…I recognize that one of the most important rights we have under the United States Constitution is the freedom of worship, and I respect that precious right. It would be the utmost hypocrisy for me to state that I believe in the free expression of religion to all of my fellow citizens and then modify that by saying “not in my backyard”. As one citizen to another my response to your request would be “welcome to the neighborhood”. I look forward to being invited to attend one of your services when your project is completed…”

The committee, while continuing to struggle with the zoning issues and concerns, took pains to utilize teaching opportunities presented by the issue. A letter went out to over 25 neighbors who had signed a petition against the project. The letter gave information about the Baha’i Faith in general and the Washtenaw County communities in particular, and provided specific detail about projected uses of the Center. On May 26, 1998, the Ypsilanti Township Planning Commission rescinded its denial of the application for a zoning variance, but asked for a variety of expensive and detailed plans and surveys to use for deciding whether to approve the application. As a result, the project was down-sized to 11,000 square feet to be built in two separate phases. The zoning variance was approved on March 23, 1999 with the caveat that construction must begin within one year. A one-year extension was granted on March 14, 2000, as it had not yet been possible to begin construction.

Groundbreaking for the Baha’i Center of Washtenaw County was held on Sunday, June 11, 2000. Invitations requested those attending to “bring a shovel or trowel decorated with a pretty ribbon (and just in case, bring an umbrella…)”. More than 150 Baha’is from locations near and far participated in the groundbreaking, and spirits were high despite a bit of rain. Dr. Peter Khan and Janet Khan were our special guests and Peter Khan was our featured speaker.

Actual construction of the Baha’i Center was begun by Phoenix Construction Company in April 2001. Construction was eventually divided into four phases and required additional time between phases to make funds available for construction.

Fund-raising has been an ongoing process, and continues at this time. The community settled early into a pattern of monthly dinners to support the Center, and the generosity of the Friends has shown itself in multiple ways. The diversity of the Baha’i community of Washtenaw County has lent itself to a wide variety of dinners presented by community members including foods from all over the world, lovingly prepared by talented and knowledgeable cooks from a variety of cultures. Support has also been provided in any number of approaches, including providing items for auction, making and selling handicrafts, football parking, providing low or no-interest loans, auctioning donations on E-Bay, and many other creative endeavors. In addition, loving support in the form of prayers from the Universal House of Justice, other institutions and many individuals have kept morale high when finances became a concern.

Our wonderful Faith has enjoyed so many successes. We all know the stories of what has been possible when the believers work together to meet a common goal. We are now presented with the opportunity to write another “story” of success with the opening of the Baha’i Center of Washtenaw County. As we change our focus from one of opening the Center to one of using, maintaining, and completing it, it is important to remember the dream of the Center belonging to all of us here. If we rededicate ourselves to the idea of this Center belonging to each of us, our story will certainly be one of success. Our Baha’i Center will be a testament to the power of our beautiful Faith, made by believers and for all.

With loving welcome and greetings from the Washtenaw County Baha’i Community
September 6, 2004

And our story continues, with your support…

(Photos of the 2004 Dedication event above courtesy of Mona Khademi)