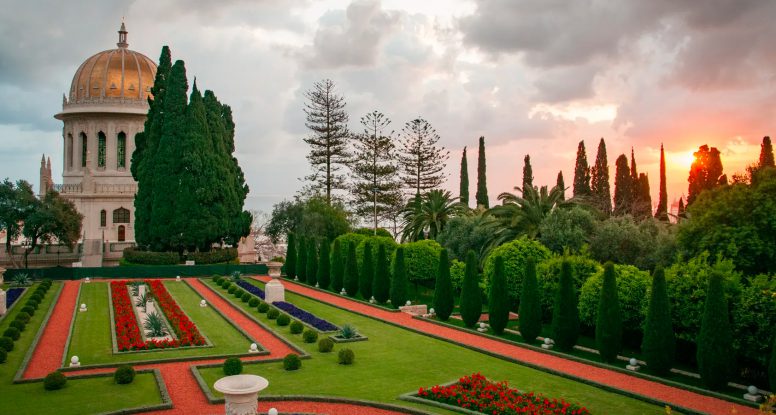 During the decade that followed, mounting opposition from both clergy and state brought about the martyrdom of the Báb, the massacre of His leading disciples and of several thousands of His followers, and the virtual extinction of the religious system that He had founded. Out of these harrowing years, however, emerged a successor movement, the Bahá’í Faith, that has since spread throughout the planet and established its claim to represent a new and independent world religion.

It is to Bahá’u’lláh (Mírzá Husayn-‘Alí, 1817–1892), that the worldwide Bahá’í community looks as the source of its spiritual and social teachings, the authority for the laws and institutions that shape its life, and the vision of unity that has today made it one of the most geographically widespread and ethnically diverse of organized bodies of people on the planet. It is from Bahá’u’lláh that the Faith derives its name and toward Whose resting place in the Holy Land that the millions of Bahá’ís around the world daily direct their thoughts when they turn to God in prayer.

These circumstances in no way diminish, however, the fact that the new Faith was born amid the bloody and terrible magnificence surrounding the Báb’s brief mission, nor that the inspiration for its worldwide spread has been the spirit of self-sacrifice that Bahá’ís find in His life and the lives of the heroic band that followed Him. Prayers revealed by the Báb and passages from His voluminous writings are part of the devotional life of Bahá’ís everywhere. The events of His mission are commemorated as annual holy days in tens of thousands of local Bahá’í communities. On the slopes of Mount Carmel, the golden-domed Shrine where His mortal remains are buried dominates the great complex of monumental buildings and gardens constituting the administrative center of the Faith’s international activities.

In contemporary public awareness of the Bahá’í community and its activities, however, the life and person of Bahá’u’lláh have largely overshadowed those of the Báb. In a sense, it is natural that this should be the case, given the primary role of Bahá’u’lláh as the fulfillment of the Báb’s promises and the Architect of the Faith’s achievements. To some extent, however, this circumstance also reflects the painfully slow emergence of the new religion from obscurity onto the stage of history. In a perceptive comment on the subject, the British historian Arnold Toynbee compared the level of appreciation of the Bahá’í Faith in most Western lands with the similarly limited impression that the mission of Jesus Christ had succeeded in making on the educated class in the Roman Empire some 300 years after His death. Since most of the public activity of the Bahá’í community over the past several decades has focused on the demanding task of presenting Bahá’u’lláh’s message, and elaborating the implications of its social teachings for the life of society, the Faith’s 19th-century Persian origins have tended to become temporarily eclipsed in the public mind.

Indeed, Bahá’ís, too, are challenged by the implications of the extraordinary idea that our age has witnessed the appearance of two almost contemporaneous Messengers of God. Bahá’u’lláh describes the phenomenon as one of the distinguishing characteristics of the new religion and as a mystery central to the plan of God for the unification of humankind and the establishment of a global civilization.

Fundamental to the Bahá’í conception of the evolution of civilization is an analogy to be found in the writings of both the Báb and Bahá’u’lláh. It draws a parallel between the process by which the human race has gradually been civilized and that whereby each one of its individual members passes through the successive stages of infancy, childhood, and adolescence to adulthood. The idea throws a measure of light on the relationship which Bahá’ís see between the missions of the two Founders of their religion.

Both the Báb and Bahá’u’lláh—the former implicitly and the latter explicitly—describe the human race as standing now on the brink of its collective maturity. Apart from the Báb’s role as a Messenger of God, His advent marks the fruition of the process of the refining of human nature which thousands of years of Divine revelation have cultivated. It can be viewed, in that sense, as the gateway through which humankind must pass as it takes up the responsibilities of maturity. Its brevity itself seems symbolic of the relative suddenness of the transition.

At the individual level, no sooner does one cross the critical threshold of maturity in his or her development than the challenges and opportunities of adulthood beckon. The emerging potentialities of human life must now find expression through the long years of responsibility and achievement: they must become actualized through marriage, a profession and family, and service to society. In the collective life of humanity, it is the mission of Bahá’u’lláh, the universal Messenger of God anticipated in the scriptures of all the world’s religions.