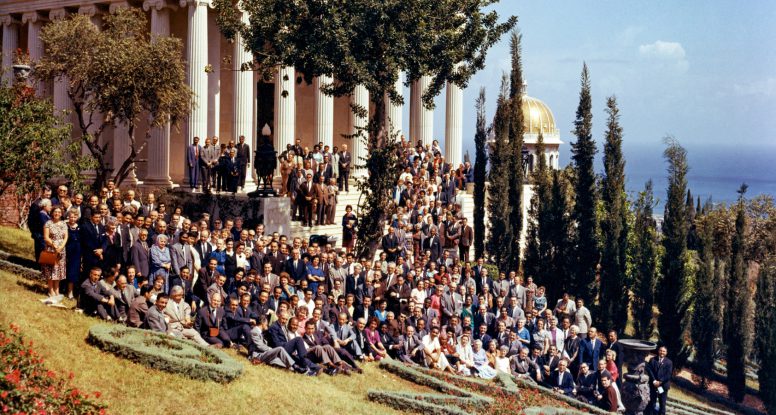 Shortly after its establishment, the Universal House of Justice continued the pattern set by Shoghi Effendi of developing the Bahá’í Faith within the framework of a series of global plans, each lasting several years. As a result, the worldwide Bahá’í community has grown significantly—to more than 5 million members today residing in over 100,000 localities.

Between 1963 and 1973, there was a notable shift in the composition of Bahá’í membership internationally as large numbers of people from Africa, Asia and Latin America joined the Faith. Tribes and minority groups represented in the community more than doubled during that decade and the number of National Spiritual Assemblies grew from the 56 that first elected the Universal House of Justice to 113. Today there are more than 170 such Assemblies.

A Positive Influence on Humanity

Bahá’u’lláh mandated the Universal House of Justice to exert a positive influence on the general welfare of humankind, promoting education, peace and prosperity. For more than 50 years, the Universal House of Justice has devoted its energies and resources to raising up a global community whose members can apply the teachings of Bahá’u’lláh to the needs of their local populations.

To know about the Bahá’í teachings is one thing; applying them, however, to the life and needs of society is something that has to be learned. As a result of the spread of the Faith in new areas, Bahá’ís began to explore systematically how Bahá’u’lláh’s teachings for the development of communities could be practically applied—in the fields of education, health, literacy, agriculture and communications technology.

A period of widespread experimentation led to the emergence of processes that seek to raise capacity within a population to take charge of its own spiritual, social and intellectual development. Beginning in 1996, the Universal House of Justice launched the entire Bahá’í world community on a global programme that has seen it enter a new stage in its growth.

From being a small community mostly concerned with its own life and activities, the Bahá’ís of the world were guided to open such activities to the public at large that would exert an increasingly beneficial influence on the life of humanity. In order to assist the Bahá’ís to acquire the knowledge, skills and spiritual insights to carry out such activities, the Universal House of Justice promoted the establishment of training institute programmes in every country.

The core activities which Bahá’ís pursue in their neighbourhoods and villages around the world are: children’s classes, spiritual empowerment programmes for young people, devotional gatherings and circles of study that build capacity for service.

Systematic action and a culture of learning—a process of planning, action and reflection—has come to characterize the manner in which the worldwide Bahá’í community functions.

As the Bahá’í Faith and its work has expanded, so too has the development of its spiritual and administrative World Centre. The Universal House of Justice formulated and published its own Constitution (1972), extended into the future the functions of the Hands of the Cause of God through the appointment of Continental Boards of Counsellors (1968), and established the International Teaching Centre (1973) at the World Centre of the Faith. The Universal House of Justice moved into its permanent Seat on Mount Carmel in 1983. The complex of administrative buildings on either side of the Seat was completed in 2001, with the inauguration of the building of the International Teaching Centre.

The preservation and beautification of the Shrines of Bahá’u’lláh and the Báb, along with other sites associated with the Faith’s history, has continued in the Holy Land. Nineteen beautiful garden terraces cascading above and below the Shrine of the Báb on Mount Carmel, stretching from the bottom of the mountain to its summit, were also completed in 2001, enhancing the site’s beauty and demonstrating the Bahá’í vision of harmony and transformation.

From 1979 onwards, following the Islamic Revolution in Iran, its sorely-tried Bahá’í community has once again faced cruel persecution. The situation has contributed to the Bahá’í Faith’s emergence from obscurity. Today it is increasingly recognized by world leaders and governments, who, in some instances, have sought out Bahá’ís for their views on, and solutions to, various social and moral problems facing humanity.

The period between 21 April 1992 and 20 April 1993 was designated as a Holy Year in tribute to Bahá’u’lláh and in honour of the hundredth anniversary of His passing. A commemoration was held in the precincts of His Shrine attended by nearly 3,000 Bahá’ís representing every national community throughout the world. Later that same year, in New York City, the second Bahá’í World Congress was held. Some 27,000 Bahá’ís from every background, representing all strata of human society, celebrated in a jubilant spirit, as did thousands more gathered at nine regional conferences on five continents which were linked to the World Congress by satellite.

As a contribution to the international discourse on peace, the Universal House of Justice addressed a message in 1985 to the peoples of the world, outlining the essential prerequisites for the establishment of global peace and prosperity. Bahá’ís around the globe presented the message to heads of state and countless others, and—inspired by the message’s contents—continue to participate in discussions, seminars, conferences and peace initiatives.

In response to a rising tide of religious intolerance, in 2002 the Universal House of Justice addressed a letter to the world’s religious leaders calling for a new dialogue about the interfaith movement and the role of religion in society. It called upon them to give due regard to the principle of the oneness of religion as a prerequisite for establishing peace.

Since the formation of the Universal House of Justice, a wide range of initiatives have also been taken in areas such as human rights, global prosperity and the advancement of women. At the United Nations, in international fora, and in all manner of social spaces at the national and local levels, Bahá’ís are increasingly participating in discussions about matters of concern to society. Young people, with their abundant energy and relative freedom, play a leading role in Bahá’í activity.

The Bahá’í understanding of spirituality embraces not only personal and collective life, but also the progress of humanity as a whole. The emergence of this widespread religious community, advancing together under the guidance of the Universal House of Justice, offers persuasive evidence that the human race, in all its diversity, can learn to live and work as one, united family in a global homeland.

Please join us for monthly devotions on every first Saturday of the month! The devotional is held at a Burns[...]
View Calendar